Migrating email from one service to another

My monthly cost with OVH's service has been £2.49 since last year.

From my experience, it has been very reliable, however I've been having email delivery issues to Microsoft and Gmail email addresses.

Also, I couldn't find a way to setup DKIM/DMARC with this service.

However, I've had the following SPF record, but I'm not sure how much it helped with email delivery rates.

My reasons to migrating to Google Gsuite

Well, email delivery is the biggest one.

I rarely send emails but I got the feeling over the past year that people haven't been receiving/reading them.

Second, I believe I can setup DKIM/DMARC records so this will help with email delivery.

Third, is having access to Gsuite's presumably unlimited Google drive service, even with one user. Who knows how long this will last.

Fifth, it's the experience with Gsuite. I've seen people mentioning on different IT news sites/forums of using Gsuite. By using it personally, I might gain valuable experience in a future role.

The only two downsides I can think of are:

First, I had to add a txt record to my DNS zone at Cloudflare to prove ownership of my domain.

After, I've done that, I had to start adding users. The 14 days trial period allows I believe adding 10 users if needed for testing.

Since it was just for me, I've already had my user setup.

I had a gotcha here however.

I've got a different Google account with my primary email address which is for testing Google Cloud's trial year with the $300 credit(~£226 at the time).

Since my email was already in use in Google's system, I had to use another email for the initial account creation with Gsuite.

Fortunately, in the admin panel/user settings I could setup email aliases, so my old address will be an alias of my new address.

I'm still exploring the admin control panel, so that will some take time getting used to.

I use Thunderbird(TB) 68.x on Debian 10, so I need IMAP access to my email address.

Then enable IMAP access for "less secure devices" in Gmail.

I added a "New account" in Thunderbird, with the Gmail imap and smtp records.

Then TB opened up a new window with a Google Oauth page asking me to grant Thunderbird access to my Gmail account, which I did. 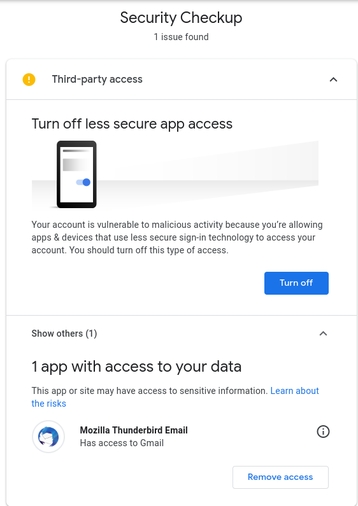 Before migrating emails over, I kept my old email address at OVH in TB.

Made 3 local folders for backup purposes.

One for the main inbox, one for sent and for an archived folder.

I've got over 5000 emails gathered over the last few years.

The first thing I've tried was trying to copy from local folders to Inbox, Sent and Archived folder inside Thunderbird itself.

However, this turned out to be unreliable with Gmail because only a fraction of my emails would be uploaded to Gmail. I'd get "Connection timed out to imap.gmail.com" error messages.

Then I've tried the Data Migration wizard inside the Gsuite admin panel, however this turned out to be way too slow.

I aborted the Migration after around 6%.

Then I remembered Imapsync from Gilles Lamiral.

I also remember that he had a docker image up at gilleslamiral/imapsync.

I've pulled down his image, then ran an instance of it and put into background:

Then attached into the container called im inside a tmux session:

Once inside the container, I started the imapsync process with:

This resulted in the following:

Many thanks for Gilles Lamiral for this brilliant tool.

Other links that I found useful for Gsuite/Gmail & Imap

After finally mucking around with the SPF, DKIM and DMARC records for hours, I get passes on all records at Gmail, Zoho and Outlook. Yay.

I plan on using Gdrive with Rclone with a crypted remote for remote backups to the cloud.

My current local backup procedure isn't the best, so adding Gdrive to the mix might help with reorganising my thinking & scripts.